“But sex is natural!”

Sex is commonly upheld as a normal and necessary part of all people’s lives—especially if it’s heterosexual, potentially procreative sex. The association between heterosexual sex and procreation is sometimes used as an excuse to invalidate other types of sex, though many forms of non-procreative sex are also dubbed “natural” by the majority. But then asexual people come along, ­describing a lack of sexual attraction or a lack of interest in sex, and all of a sudden the word unnatural rings out.

Peculiarly, those who invoke presumed avoidance of procreation as proof that asexual people are unnatural won’t often use that argument to invalidate heteronormative, sexually active, but non-procreative lifestyles. It’s very rare to hear “that’s unnatural!” applied to heterosexual cisgender[6] people who use non-procreative sex positions, have sex using birth control, or have sex that involves a postmenopausal or otherwise infertile partner, even though procreation cannot result from these couplings. This is because labeling asexuality as unnatural is not actually about reproduction, even when detractors claim it is. It’s about intimate connection—and about the misconception that asexual people cannot experience a supposedly necessary connection with others unless they have sex. Asexual people often cannot be recognized as whole or healthy people if they lack sex, sexual attraction, or sexual inclination in their lives. 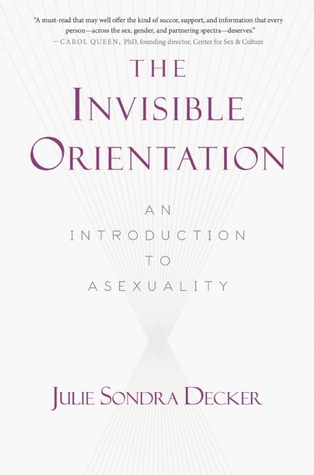 What if you weren’t sexually attracted to anyone?
A growing number of people are identifying as asexual. They aren’t sexually attracted to anyone, and they consider it a sexual orientation—like gay, straight, or bisexual.
Asexuality is the invisible orientation. Most people believe that “everyone” wants sex, that “everyone” understands what it means to be attracted to other people, and that “everyone” wants to date and mate. But that’s where asexual people are left out—they don’t find other people sexually attractive, and if and when they say so, they are very rarely treated as though that’s okay.
When an asexual person comes out, alarming reactions regularly follow; loved ones fear that an asexual person is sick, or psychologically warped, or suffering from abuse. Critics confront asexual people with accusations of following a fad, hiding homosexuality, or making excuses for romantic failures. And all of this contributes to a discouraging master narrative: there is no such thing as “asexual.” Being an asexual person is a lie or an illness, and it needs to be fixed.
In The Invisible Orientation, Julie Sondra Decker outlines what asexuality is, counters misconceptions, provides resources, and puts asexual people’s experiences in context as they move through a very sexualized world. It includes information for asexual people to help understand their orientation and what it means for their relationships, as well as tips and facts for those who want to understand their asexual friends and loved ones.